Posted: January 17, 2023 Under: Java By Jakub Radlica no Comments

Above the horizon of the Java ecosystem, a new star called “GraalVM” has started to shine. Are you tired of slow startups of your Java microservices, i.e. the time from starting the process to the service readiness seems to be too long? You have come to the right place. We decided to evaluate GraalVM by using it in one of our Spring applications, which has been developed for a few years. It was an experiment to determine if the migration is worth being considered and in which scenarios. In the article, we briefly present GraalVM and describe our observations about the challenges, problems and limitations related to it.

GraalVM – what is it?

On the project page, we can find a bunch of pretty definitions like:

After reading above definitions it could not be clear what the GraalVM actually is.

From the perspective of Java/Spring developer, by “GraalVM” we can mean two things:

Previously, in the pre-GraalVM era, when we were talking about the native code in the context of the Java language, we have meant the native code generated by just-in-time compiler in the JVM during the Java application execution.

The standard scenario for many Java applications looks as follows (major simplifications ahead):

The flow described above is a reason why Java is called platform-independent – the Java bytecode is handled by JVM supporting the given CPU architecture.

The GraalVM native image is a technology that allows compiling a Java source code ahead of time to native code (machine code) / native executable which could be directly executed on the existing hardware. It allows creating an application with faster startup, reduced memory consumption and application size in comparison to a standard Java application.

Why is it becoming more and more popular? What are the pros and cons of native image?

The first version of GraalVM and native-image tool was released around 2019. Since then, it is becoming more and more popular. Let’s look at the “popularity statistics” measured in the number of stars given to the GitHub repository. 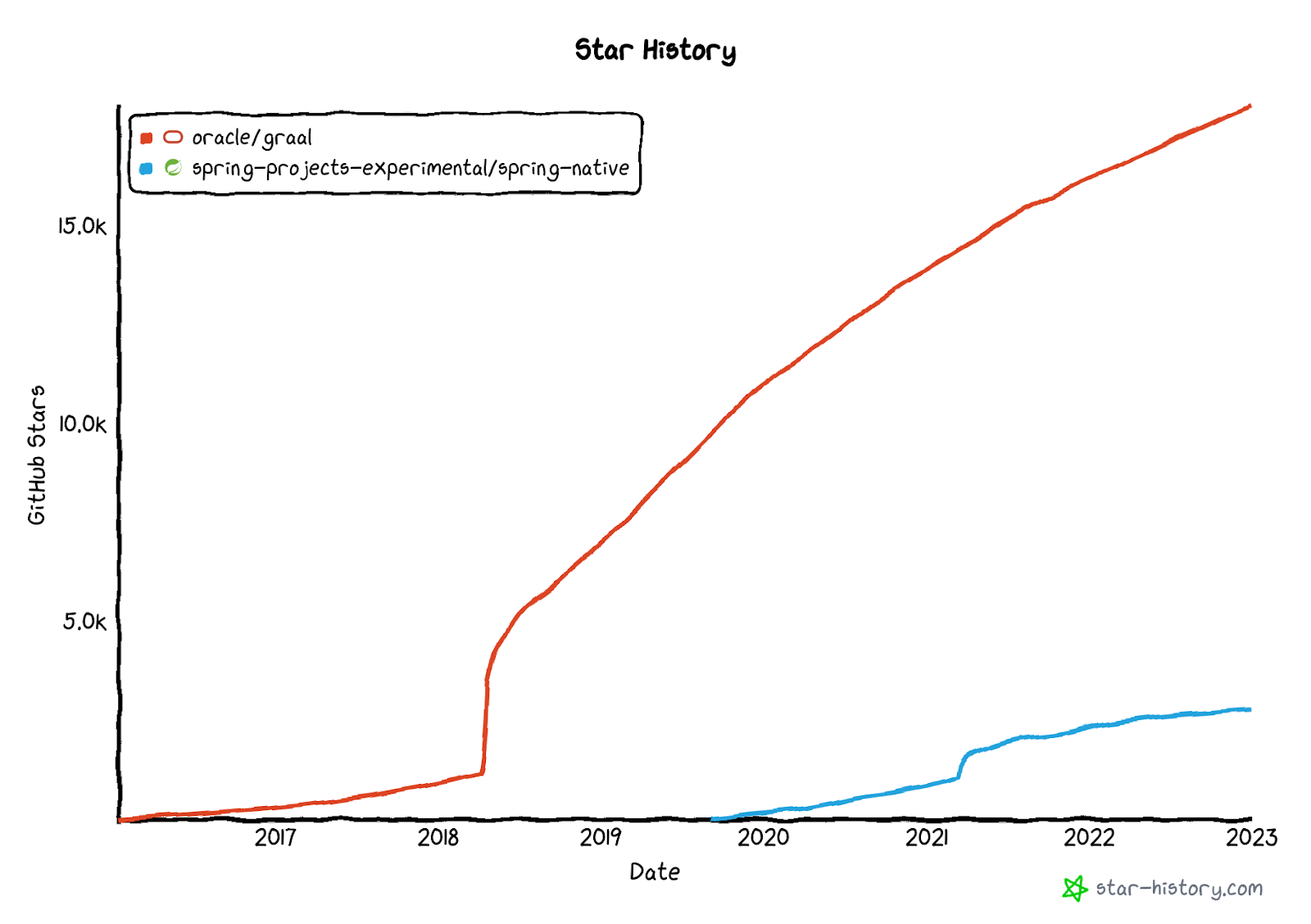 There are a multiple answers to the question “Why is it becoming more and more popular?”:

It seems like “must have” technology in case of Java serverless services (e.g. Lambda).

Unfortunately, this technology has at least few limitations:

The significant number of challenges, problems and limitations of this technology relates to the “code reachability problem”. The comprehension of this problem is crucial in order to understand this technology from a developer perspective.

During compilation of Java code into a native executable GraalVM performs a point-to-point analysis, starting from application entry point. Native-image tool determines which parts of the code are reachable and used at runtime. The native code is generated only for reachable code, so when any part of the code is considered by GraalVM native-image tool as not reachable it would not be placed in the native executable.

What does it mean that “code is reachable”? Let’s consider following application:

In the above simplified example:

In the target native executable, the Human class will contain only a drinkCoffee() method. If in any other place in the code someone will try to invoke a flyIntoSpace() method using reflection, the NoSuchMethodException will be thrown.

The method invocation through the reflection mechanisms can sound as something unnatural. These mechanism is typically used by frameworks like Spring which leverages reflection for beans initialization, dependency injection and to provide AOP (aspect-oriented programming) support.

GraalVM allows defining a “reachability metadata”. The metadata in which we can configure which not-reachable code should be added to native executable. Some frameworks provide solutions which prepare such metadata config out-of-the-box, others require a manual configuration.

GraalVM provides a tool called “GraalVM Dashboard” (graalvm.org/dashboard) which allows visualizing information about the code reachability in the application. The description of it is out of the scope of this article.

Many popular Java libraries and frameworks already support compilation to native-executable out-of-the-box, but unfortunately not all of them. In case of libraries which don’t support this type of compilation, we should prepare a manual configuration (for mechanisms like: dynamic proxy, reflection, dynamic class loading).

Sample libraries which do not fully support compilation to native image:

Oracle maintains a GitHub repository which provides a “reachability metadata” for libraries which don’t provide such metadata (e.g. reflection & dynamic proxies config), so even if a given library does not support compilation to native executable out of the box, you can check the following repo:  graalvm-reachability-metadata – maybe someone already prepared and shared a reachability configuration for this library.

The process of compiling the Java code to the native executable depending on the situation can introduce some changes in the application code (e.g. removal of the potentially unnecessary code).

However, when we compile this application to native-code and will try to send valid POST request to /users endpoint we will get the HTTP 500 Internal Server Error:

The reason for this is the fact that during application compilation GraalVM determined the constructor of CreateUserDto as not reachable. In result it wasn’t compiled to native code. To detect such problems during the development, we should run our tests in a native image (the instructions on how to do this could be found for example in Spring Boot documentation).

When we perform our test in native image we will see:

That’s why it is important to have a high test code coverage and high test quality – of course we all already know it, however, usage of native-image provides us with a next example why we should aim for this.

The application classpath is fixed at the native executable build time. So there is no way to add additional configuration files or libraries to classpath after application compilation.

Let’s assume that we have a Spring boot application which defines following additional source of properties in following way:

On the server there are two directories with two alternative configurations:

and depending on the scenario we would run an application with one of above configurations. Previously, we did this via defining additional classpath files using the -Dloader.path Spring parameter (java -jar app.jar -Dloader.path=/config/standard-plan). After compiling the Spring boot application to native executable it is no longer possible. Instead of this, we can define an additional source of properties using a --spring.config.location parameter using the absolute paths to properties (java -jar app.jar --spring.config.location=/config/standard-plan/integration-with-optional-service.properties).

Both Spring profiles and conditional beans are not supported in Spring boot compiled to native executable (#1613). So in cases where there is a need to use them, the conditional logic should be implemented in another way depending on our scenario.

GraalVM native-image looks like a very promising technology especially in the context of applications based on the microservice architecture. We think that in some scenarios it could be a real game-changer. We hope that we will have an opportunity to join the GraalVM community and use this technology in our future projects.